Everything about Peter Hayes and his work vibrates with life and enthusiasm. He has travelled and lead projects in Africa, India, Japan and Korea and has embraced into his own practice many of the ideas and techniques he has observed in local craftspeople. 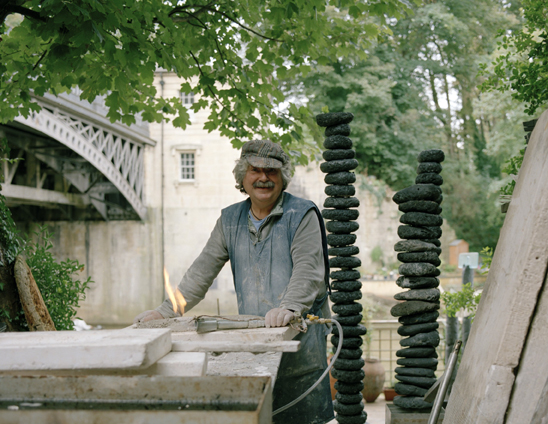 The history of ceramics has always fascinated him since digging Neolithic Iron Age and Roman samien shards in an archaeological dig whilst still an art student in Birmingham. The interest was extended after he spent several years travelling through Africa working with various tribes and village potters and being intrigued how, with limited technology and basic tools, they were able to get such exquisite surfaces.  He found the same inherent skills in India, Nepal, Japan and New Mexico.  In Japan he first discovered raku and the whole Shinto idea of working with opposites – fire and water, rough and smooth, humble and powerful, ying and yang. Ideas that have shaped his work ever since.

On his final return to England he settled in Bath, where he has had his studio since 1985.  Peter is now one of the leading exponents of his art.  His ceramic sculptures are heavily influenced by all he has learnt on his travels from monolithic stones in the Cornish landscape to the deep red slip, first observed in Lesotho, which is added to some of his pieces.  He achieves opposites of rough and smooth by building up layers of textured clay and burnishing and polishing some of the surfaces.

Raku Bows with Discs 5 and 4 both SOLD

Weathering is an integral part of his process.  Work may be left outside, or submerged in the sea or the river outside his  workshop, sometimes for years before he rediscovers it.  He says he ‘finds it joyful’ to work with many different clays from bone china to crank.  He uses clay that is not meant to be suitable for raku firing so that it cracks in the kiln and produces the surface which is a signature of any Peter Hayes work.  ‘It is the clay that is in charge and it will only let you make what it wants. It is my job to push it to its limits and somehow an equilibrium is made between maker and material.

Recently he has set up a studio in India where he is able to make much of his work, especially in the winter.  They grind glass and marble into simple luminous forms he can incorporate into his work. More images of Peter Hayes’ 30 or so pieces of work in the exhibition are shown below. Please email gallery@sladersyard.co.uk or phone 01308 459511 if you would like to buy or discuss any of Peter Hayes’ pieces. Peter is happy to make commissions.  His larger pieces are mostly suitable for outdoors and depending on where you are, he will come and install outdoor work for you.

We have currently sold out of Peter Hayes’ work. If you would like a notification of his next show at Sladers Yard, please do contact us by replying to this page or email gallery@sladersyard.co.uk or telephone 44 (0)1308 459511.