‘The local colour of an object does not belong to the object. The colour that seems to sit on it is subjective, fleeting, effervescent, and is as illusive as magic.’ (Winifred Nicholson 1978 p.51)

Winifred Nicholson, aunt to Tim Nicholson, wrote these words to describe how different forms of light, whether sunlight, moonlight or electric light, change the colour of an object – its radiance, its ambiance.

Often the objects, creatures and landscapes in Tim Nicholson’s paintings bask in the glorious light of a bright summer’s day; a day when dappled shadows are cast: soft, intricate lace shadows; striped, stippled, spotted. Less frequently the light is subdued and there are ice-grey gentle musk-dawn colours.

If colour is one central feature of Tim Nicholson’s paintings, another is a Klee-like concern with organisation and precision. Like his father the Modernist architect Christopher Nicholson, and his uncle Ben Nicholson, Tim has a special love of mathematics, systems, logic and method. This directly informs and shapes his painting, underpinning and structuring his work. Sometimes diagrams and notes in pencil remain on the side of a painting, becoming part of the work itself.

Over the years, and in myriad ways, Nicholson has returned to favoured subjects. Three of these are birds, horses, and the landscape of Cranborne Chase. If he sets his solitary horses on the vast chalk downs of the Chase, the scale of the land turns them into diminutive toys. Sometimes, though, his horses are the sole subject, and garnished in bright array they become decorative creatures; lineal descendants of the poster images which his grandfather, Sir William Nicholson, produced in the 1890s when he teamed up with his brother-in law-James Pryde under the pseudonym of the Beggarstaff Brothers.

Whatever the subject matter, a striking feature of Tim Nicholson’s work is the way he eliminates unnecessary detail so that ‘only the necessary speaks’ (Hans Hoffman). It takes boldness and skill to reduce a subject to fundamental shapes and planes, to simplify space and colour, and to minimise the complexity of the subject matter whether it be a jug, a landscape, bird or animal. Yet Nicholson succeeds brilliantly in this.

Nicholson was an architect at a time when Mies van der Rohe’s dictum of ‘less is more’ was prevalent. Less is certainly more in Nicholson’s paintings, and whatever the subject his paintings offer an arresting and beautiful form of visual magic. Alive with wit, joy, humour and honesty, they brim with life. Such a powerful evocation of emotional response is the mark of a truly fine painter, possessed of a distinctive vision and delighting in the affirmation of life.

Vivienne Light FRSA is a writer, curator and publisher with a special interest in the visual arts of South West England. Her books include Re-inventing the Landscape and Circles and Tangents: art in the shadow of Cranborne Chase. 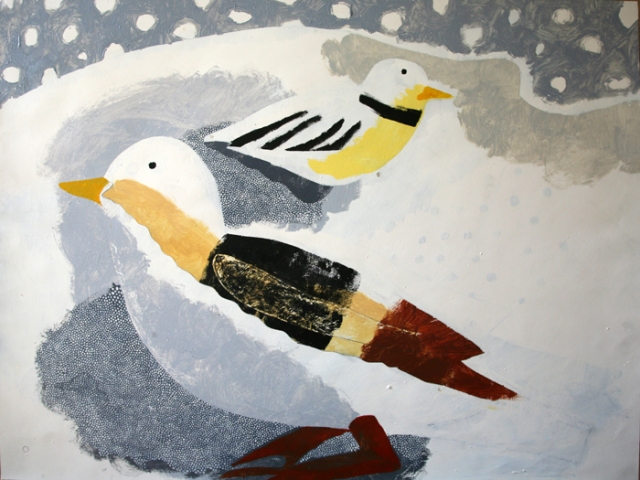